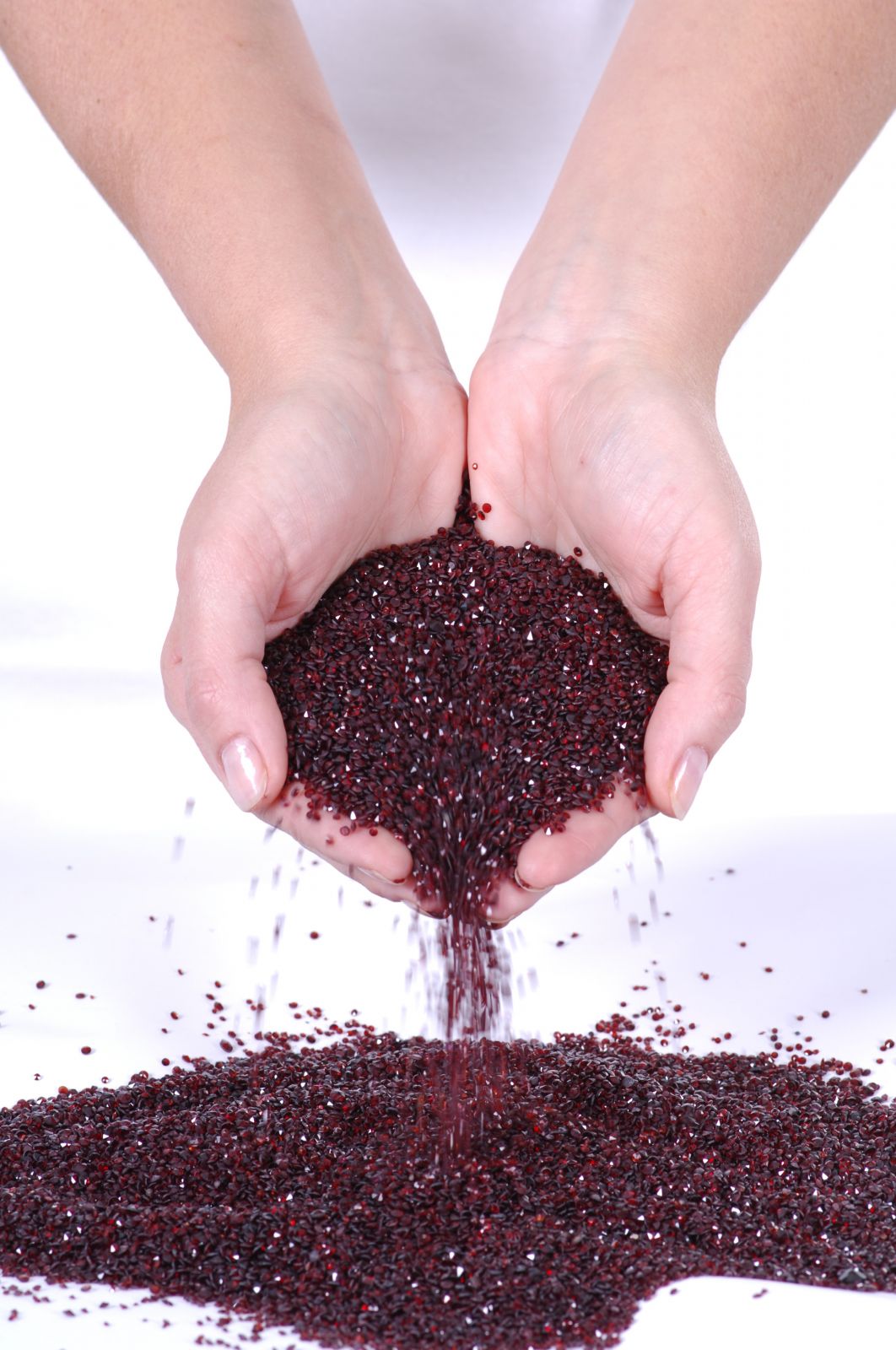 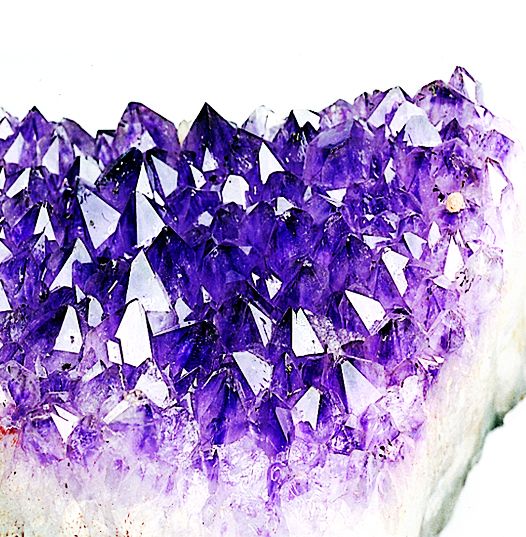 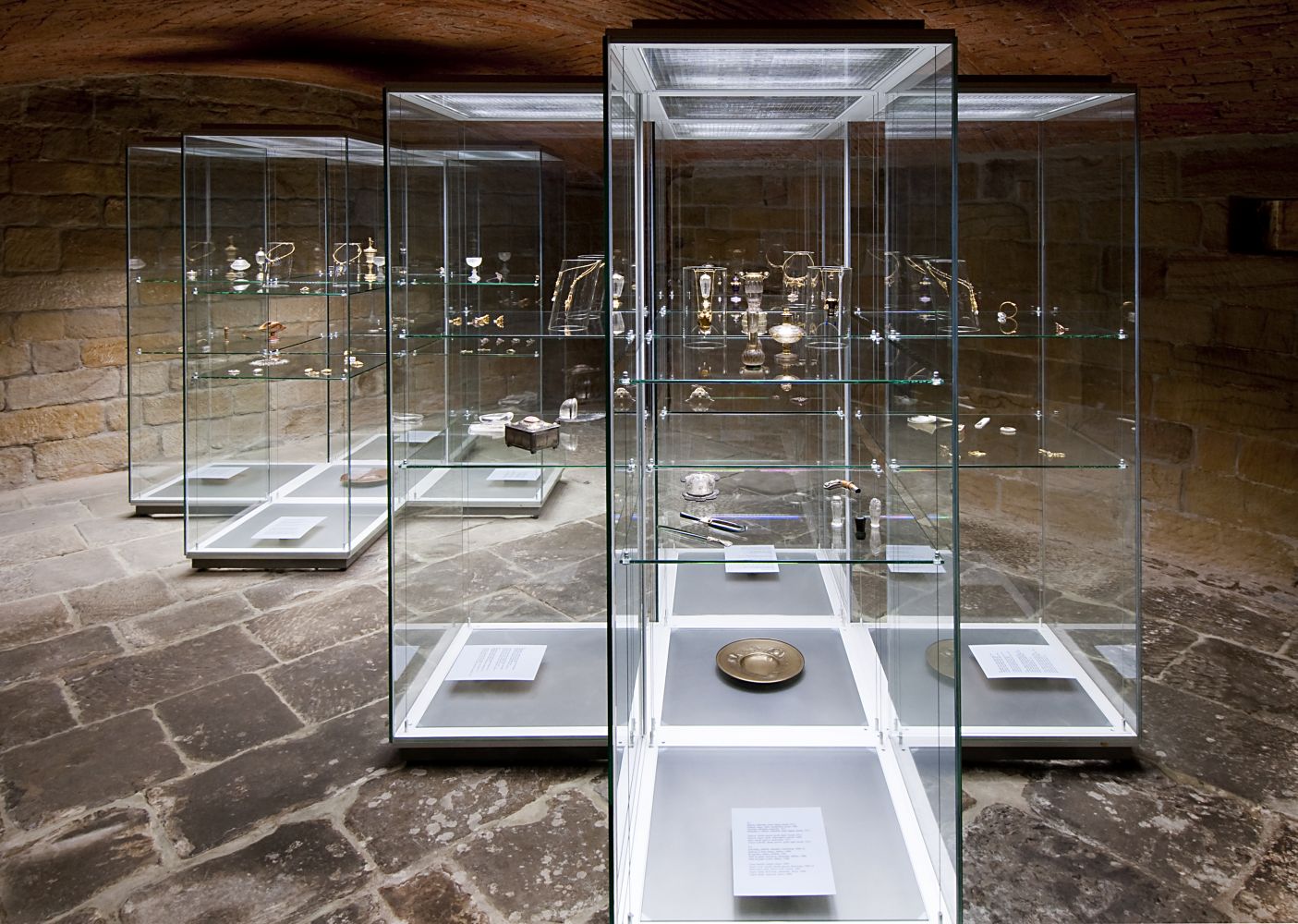 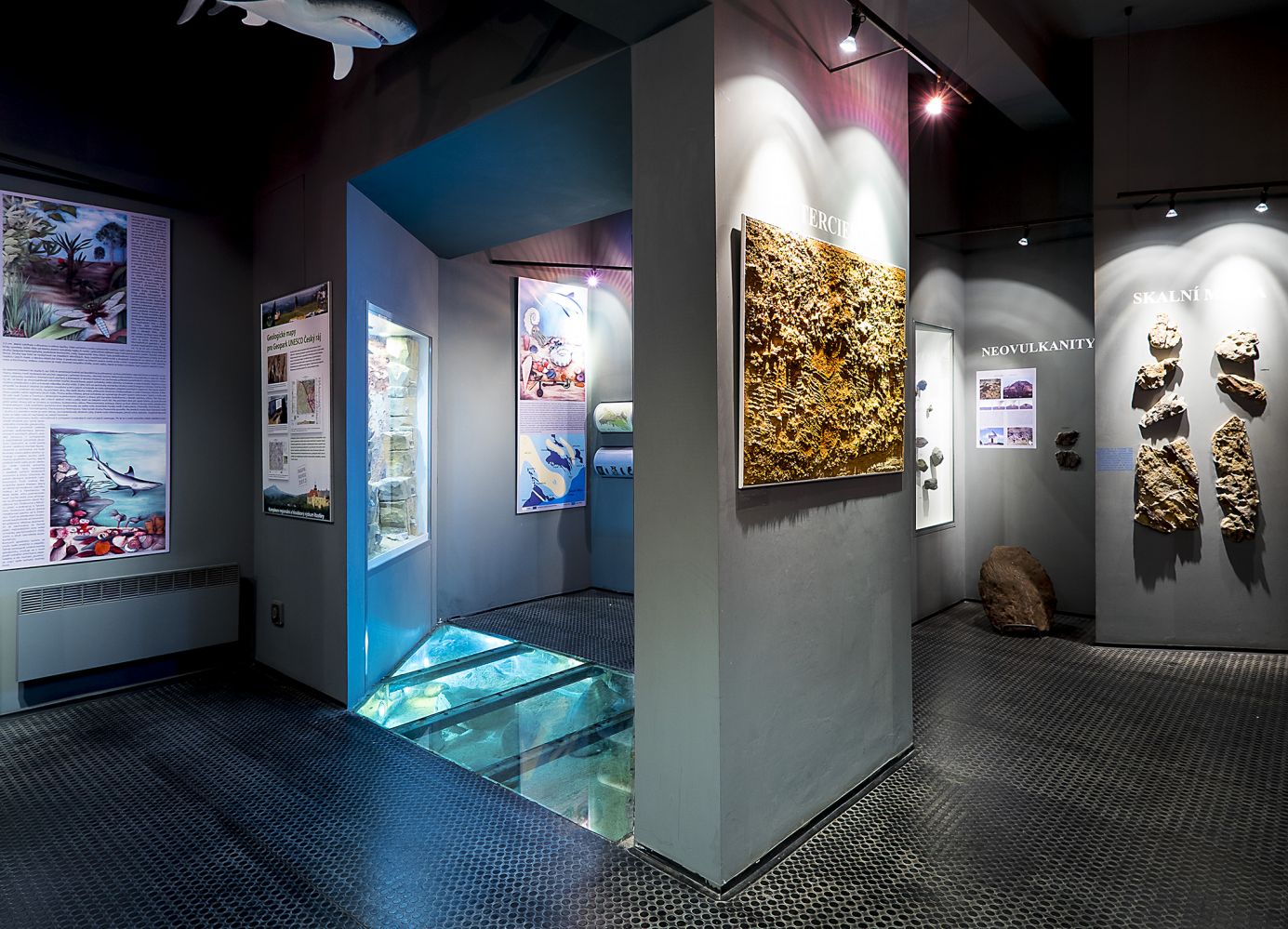 Mannerisms and the Baroque period.

An explosion of emotions, dynamics, monumentality, never-ending decorativeness and ostentation. The enchantment of symmetry, roundness and expressivity. Drama. The wave of motion. When the Baroque entered Bohemia, it brought the popularity of gold and precious stones. Gold went mostly to churches, diamonds onto necks, fingers and dresses of wealthy citizens. Precious stones took over jewellery production. Beautiful sets of diamonds were completely necessary for social court life. Women, as well as men, were embellished with jewellery.

The interest was tremendous, the whole of Europe longed for precious stones. The centre of stonemasonry is Prague, but it turns out that Turnov is also starting to play a significant role and will soon outrun Prague. Cutters and grinders meet on the main square with goldsmiths, silversmiths, traders and prospectors who set out for a trip to Kozákov to find precious stones, and to the Jizera Mountains and the Giant Mountains as well. There is a functioning grinding workshop, the first-ever workshop of its kind in Bohemia, in the post Battle of the White Mountain era. The 17th century slowly comes to an end, yet the interest remains. The demand is so high that stocks or new findings of precious stones are not enough.

People are extremely creative creatures. Humans always know what to do, especially if money, living and success are involved. On the banks of a Venetian lagoon, an idea was born. If we don’t have enough precious stones, let's imitate them using glass. The success was immense, and the producers from Turnov noticed that. They are not going to let anyone take their prosperity and prestige! And so, they soon start to produce glass compositions in Turnov and cut them into artificial gems. How did it happen? Only God could judge. Maybe, two brothers were involved - Jan and Václav Fišer from Turnov. They visited Venice to obtain its heavily guarded secret, then returned home and tried and tried. After dozens of failures, they finally succeeded! In 1711, they produced the first glass for the production of artificial gems. It is just a legend, and we have no proof, but it was probably like that. However it may have happened, soon firemen, lab technicians and composition grinders joined the cutters and grinders of precious stones. Stonemasonry has now two branches – “hard”, which processes and refines semi-precious and precious stones imported or found in a local area, and “soft”, which works with glass.

People from Turnov did it their way. They were accustomed to the high quality of hard processing, and they did the same with glass processing. And it paid off. From the very beginning, they aspired for the most perfect imitation of precious stones. It didn’t take long before they were melting glass that could imitate diamond, topaz, aquamarine, sapphire, lapiz lazuli, turquoise, hyacinth, amethyst, cornelian, opal, olivine or smaragdite. The success of these imitations was great. And when they perfected the glass composition imitating Czech garnet, which was getting more and more popular, there wasn’t any competition for some time. First, the world acted like these stones are real – hush – we know – but soon, a new fashion discipline was born, which brought cheaper and accessible jewellery to the market. And “Turnov stones”, became magnificent – a great material, cut and ground perfectly.

The Czech language gifted these stones with a beautiful name – some of them are called “karmazínky”. A beautiful word like those from nursery rhymes. These artificial stones had several advantages over real stones. The cost certainly was an advantage. The second benefit was great variability. The final form of the stone could be processed colour-wise and shape-wise according to the customer’s idea and preference. Lab technicians were searching all the time for new forms, colours, shines and properties of glass – it was new alchemy. They were using metals to colour the glass and later salts. It was a never-ending exploration. Sure, there were some errors with no results. Sometimes, these mistakes led to a fundamental discovery. They say the famous garnet glass composition from Turnov was created when someone inadvertently dropped a piece of steel into hot glass.

“Are you here, Frantisek? “, echoed through the workshop. “Come in Václav”, someone replied from around the corner. “We are about to open”. The furnace was sleeping on the other side of the room. The furnace was cooling down on the third day. Soon they are going to break those bricks that the Fisher brothers had used to brick up the hot muzzle filled with clay jugs full of matter ready to be transformed into a glass composition. “Just a moment”, said František and sat by the table. “I want to go over the purchases”, he was looking at the paper covered with dense notes. “Borax was brought yesterday. It got more expensive - a pound is worth three gold pieces.” Václav murmured: “It is expensive, but stones get much better fire than when we used saltpetre, which was very cheap.” František pointed to the paper again. “Minium and saltpetre will arrive from Prague later in the evening; marl will arrive tomorrow from Hesse. It is further than Dresden.”  “Are there enough jugs?”, asked Václav. “There is a full shelf of those from Silesia. We´ll see how they work." The workshop was silenced. Then, František got up and started to walk around the workshop nervously. “Today, almost everybody has the pliers we have created. It is infuriating. I would have never thought they would be so successful.” Václav nodded grimly. Really, who could have known that their invention would be so ground-breaking? And yet it was so simple – wooden pliers with fixed metal moulds. All you had to do was to squeeze the glass, tip the finished piece and then just cut and grind it. It was a huge time-saving. “There are more and more stones. The prices are going down. They now melt and press everywhere, even in the mountains” murmured František unhappily, but Václav burst out: “Have you heard about the proposal of the mayor´s son-in-law? František nodded. “Yes, I have heard about that, but they will never allow his Grace the Count to do that. That would destroy us all. “If only” growled Václav. “It´s time”, he said, “let´s open”.

Perhaps, we should explain what the proposal was about and who the son-in-law of the local mayor was. His name was Jan Modestin. He was a businessman in Prague, and he came to Turnov to see his father-in-law with huge plans. He wanted to build a great factory for the production of glass compositions. The material would then be given to local cutters, and he would sell the final stones. The whole plan was worth a lot of money - fifty thousand gold pieces! However, in one year, the material was supposed to leave the factory with double value and Modestin would get some fifteen, or maybe up to thirty per cent profit. František Fischer was right, after all, Count Valdštejn rejected this project, and so they continued to produce the glass composition in the same way.

To produce glass was one thing, but to cut and polish it was another. They cut the stones with sandstone sanders, exactly how real precious stones were cut. Polishing was done with grinding discs from poplar wood and tin. There were all kinds of shapes, gradually one of them turned out to be the most successful – the “chaton”, with eight flat areas on top and the bottom. The demand was very high. It looked like the stones from Turnov couldn’t be dethroned. Venetian glassmakers were very angry and irritated, but there was nothing they could do. Turnov´s products exceeded them, especially in quality and often in range. Nevertheless, the deathblow came from somewhere else, from Paris. There, Joseph Strasser, a former Viennese, and Paris jewellery maker launched his “Štrasy”, in French “Pierres de Strass”. Behind them, there was his discovery of high- lead glass. Stones cut from this composition glittered and refracted light unusually.  Fashion changed again, and everyone wanted strass. In Turnov, they were sounding the alarm, but to no avail. The prices fell to rock bottom – goods that were worth fifty-seven gold pieces were now worth only one. It looked like the end of Turnov´s trade with glass stones.

However, they shouldn’t have underestimated the stubbornness of the fierce stonemasons. They searched and searched until they found it. As in the case of the Venetian secret years ago, they now discovered the secret of strass. They immediately started production and trade as well. And they achieved prosperity very quickly. In the year 1772, export from the Czech Kingdom was more than one hundred and thirteen thousand gold pieces, which was roughly one-third of the whole export of glass products.

The Baroque was slowly leaving, and many other different styles started to come to Europe. The popularity of jewellery remained intact. In the next centuries, they were producing beautiful imitations of precious stones in Turnov and other parts of the Crystal Valley, especially in Jablonec. The technology evolved, and machines entered production in the second part of the 19th century. In Jablonec, the machines started to be used half a century later. Even today, only fifty per cent of jewellery stones are processed using machines – the rest is handmade. Yes, the Baroque tradition remained even in the third millennium, today, the Preciosa company is in charge of the production of glass stones. And the company honours the tradition of its Baroque predecessors. It owns roughly a quarter of the world market! And the biggest competition? Swarovski. An Austrian family company, which comes from … where do you think? Of course, from the Crystal Valley.